Most brides will opt for a white wedding dress to get married in. Whether if she chooses a  traditional catholic ceremony or a civil union, or even if it’s a second o third marriage, a dress in a white shade is by far the most common color.

But do you know when and how this all started? You might think that this tradition goes back  many centuries. This is only partially true. Many people also assume and that white symbolizes purity and virginity, but that was not the original intention.

It was the marriage of Queen Victoria to her cousin Albert of Saxe- Coburg in 1840 that really influenced the tradition of marrying in white. Long before that, white was a popular color to get married in among the higher classes. Wealthy brides often wore white to demonstrate their money, not their purity. However, the fabric was more important than the color to express the wealth, and many other colors were also commonly used: For example, blue was the color originally connected to purity, piety, faithfulness, and black was used a lot Scandinavia. White was not a widespread trend yet.

Margaret Murray-Prior, in her wedding dress, 1882

But after Queen Victoria’s wedding, elites in Europe and across the Atlantic quickly followed her lead.

Portrait of Queen Victoria in her lace trimmed wedding dress. (by Winterhalter, 1842)

The middle classes adopted this color only after Word War II, when media became more accessible and  Hollywood started to portray white weddings in movies.  In 1981 a three-quarter billion people watched Prince Charles marry Diana; this wedding is considered the most influential white wedding of the 20th century. It’s hard not to remember Diana’s white taffeta dress with this endless long train. 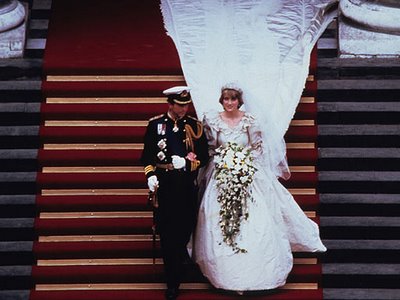 And today, when a celebrity announces her engagement, everyone gets so excited and  can’t wait to see her dress. Angelina Jolie, Jennifer Aniston, Miley Cyrus, Jessica Simpson are probably the most anticipated brides to be. Let’s just hope they’ll opt for the traditional white.